Teo’s favourite word is ‘impossible’ and he absolutely loves it when people use it to describe any of his undertakings. What he enjoys even more, however, is proving them wrong. His character ain’t easy to depict, though you can’t go wrong by saying that he is a serial entrepreneur and a talent enabler. In all of his ventures, Teodosiy has always sought to empower the passionate, driven and gifted individuals, regardless of their social, academic and professional backgrounds. He believes that this is the only way to ‘hack the system’ and achieve what has previously been seen as impossible.

It should come as no surprise then that Teo’s favourite quote is by Margaret Mead and goes like this: ‘Never doubt that a small group of thoughtful, committed citizens can change the world; indeed, it's the only thing that ever has.’ And it almost feels as these words have been used as the very blueprint on which Teodosy has created Kinetik Automotive. Because behind the captivating name and the beautiful logo, there is a small group of considerate and highly driven people who are literally changing the world of motoring.

From a very early age, he’s had keen interests in a series of fields amongst which robotics, aeromodelling, electrical engineering and pyrotechnics. By the age of 13 he had already made an electric conversion on his bike, created a 3D model of a CNC machine, a working jet engine and built a Tesla coil to listen to music on. And as if that wasn’t enough of a resume, Ivan has experience programming in multiple languages! Currently, he spends his free time building a large music recording studio, playing the piano and restoring his classic cars.

Our creative director is a dedicated automotive enthusiast. Although he studied to be an engineer, he found design to be his calling. As a designer with substantial experience, he has received numerous accolades and awards as well as international recognition for his work. He always relishes a challenge which led him to have a key role in developing Kinetik as a brand as well as helping bring our first products to life. Kostadin possesses a keen eye and strong attention for detail, as well as as an unhealthy obsession with consistency.
His engineering education has left a big imprint on his design approach, thus he always puts function before form and is fixated on lightweight construction. We are almost sick of hearing him quote Colin Chapman in the office. Kostadin is proud to be leading our talented design team and hopes that he can bring the thrill of the past automotive glories into the future trough adopting new technology.

An adventurer who can fabricate literally anything you throw at him, that is Yavor Yankov. He is an integral member of the Kinetik Automotive family and has been part of every project since the early days of the company. Usually, you can find him either at his desk or in the shop manufacturing yet another part for the Model 07 or any of our other undertakings.

Yavor is also a one time downhill mountain biking national champion and an overall adrenaline junkie. He loves the outdoors, which you can easily guess by taking a single look at the vehicles he owns. Apart from the 4x4 he also has a campervan, which if you haven’t already figured it out, he is building himself. And the best thing about Yavor is that whether we are working or not, you can always rely on him to have a good time!

Dani is a great example of why you should never give up on your dreams. Ever since he finished school he has done everything in his power in the hope of becoming a car designer. The automotive industry, however, is an extremely competitive field where often hard work and dedication alone just are not enough. By a pure stroke of luck though Dani found himself in Bulgaria visiting his girlfriend’s parents when the COVID 19 lockdown happened. Realising that he won’t be able to leave the country for quite some time he went on the internet in search of a job. Within five minutes he found the Kinetik Automotive website and the rest is history.

Dani literally lives and breathes design and is constantly looking to make products more user-friendly. He defines himself not as an artist, but as an industrial designer who loves cars and for him, function should always come before form. He believes that vehicles need to serve a purpose but also create memorable experiences.

Describing a person with just a single word is a tough task, though that isn’t the case with Anton. He is an innovator by heart. And you don’t even need to have spent much time with him to know that. It is plain obvious. He has an incredible drive to create and introduce technologies that would help people have better, longer and happier lives. His enthusiasm is incredibly infectious which is one of the reasons why we love working with him so much.

At Kinetik Automotive, Anton is our Project Manager and Electromechanical Engineer. He makes sure that the workload is distributed evenly and efficiently within the team and that all projects are moving according to plan. Apart from that, he is also accountable for most of the electrical work done on the car’s drivetrain. Moreover, he is also responsible for coordinating our network of partners and suppliers. So if you happen to be one of them, you are most probably talking to Anton.

Mitko is an intern at Kinetik Automotive and even though he’s only been with us for a short amount of time he has already proven himself as a valuable asset and a great team player. Thanks to his hard work and dedication he has earned our trust and is now the lead designer on not one, but two different projects. Moreover, just like the rest of us, Mitko wears many hats. Apart from sketching and designing he is also the man behind many of the detailed parametric 3D models that we use for printing.

Despite growing up in the computer age, Mitko has managed to find the balance between digital and analogue in his work. He believes that the latter offers more flexibility and virtually unlimited possibilities when trying to communicate an idea. Despite that, he admits that the speed and feel of doodling on paper are still unmatched by any digital tool he has ever gotten his hands on. When it comes to inspiration, Mitko has an appreciation for automotive designs from all eras, though he is most fascinated by the 1960s in America, when creativity, optimism and inspiration were off the scale and cars definitely reflected that.

Gerard was born in a small village in the Netherlands and up to this day has been struggling to grow a full beard. But don’t be fooled to think that the man has no interesting stories to tell. In fact, there are plenty of them considering that he has cycled through Turkey, Iran, Uzbekistan, Turkmenistan, Iceland, USA, Russia and Mongolia and has studied and worked in France, Switzerland, The Czech Republic, USA and The Netherlands. Gerard is also a passionate climber, the founder of the Clean Climber foundation and the inventor of a unique product currently going by the name of Edelrid Balance.

And whenever Gerard hasn’t been on his crazy adventures, he’s been taking part in the development of exciting projects such as Ten Kate Racing, Mission Motors, Trefecta, Suter Racing Technology, Gordon Muray T25 and many others. With a masters degree in automotive engineering and such extensive experience in the field, it is no wonder that we wanted to bring him on board. Thus, after several months of remote collaboration, Gerard made his way to our HQ in Varna and became part of our team.

A telecom engineer, manufacturing engineer and an embedded systems programmer. This is Ivan Nikolaev - an old friend of the Kinetik Automotive family and since mid-2020 a full-time member of our team. His wide engineering background, multipotentiality and great sense of humour make him a valuable asset and an amazing colleague to work with.

If asked about his favourite leisure activities Ivan is most probably going to mention playing computer games and watching movies. But most of all he loves taking things apart to find out how they work and eventually put them back together. Keeping that in mind it shouldn’t come as a surprise that he is also a firm believer in fixing things rather than buying replacements. 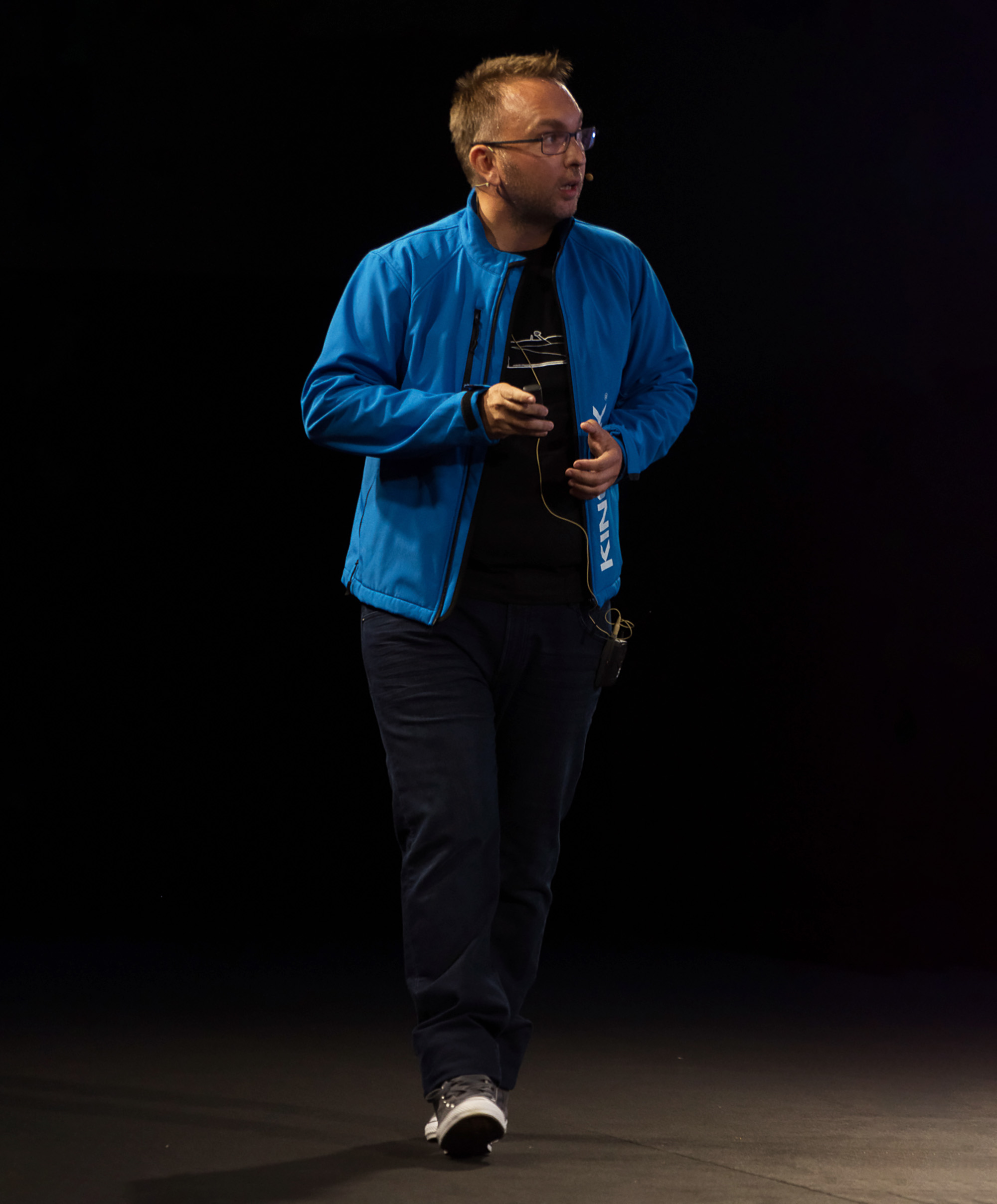 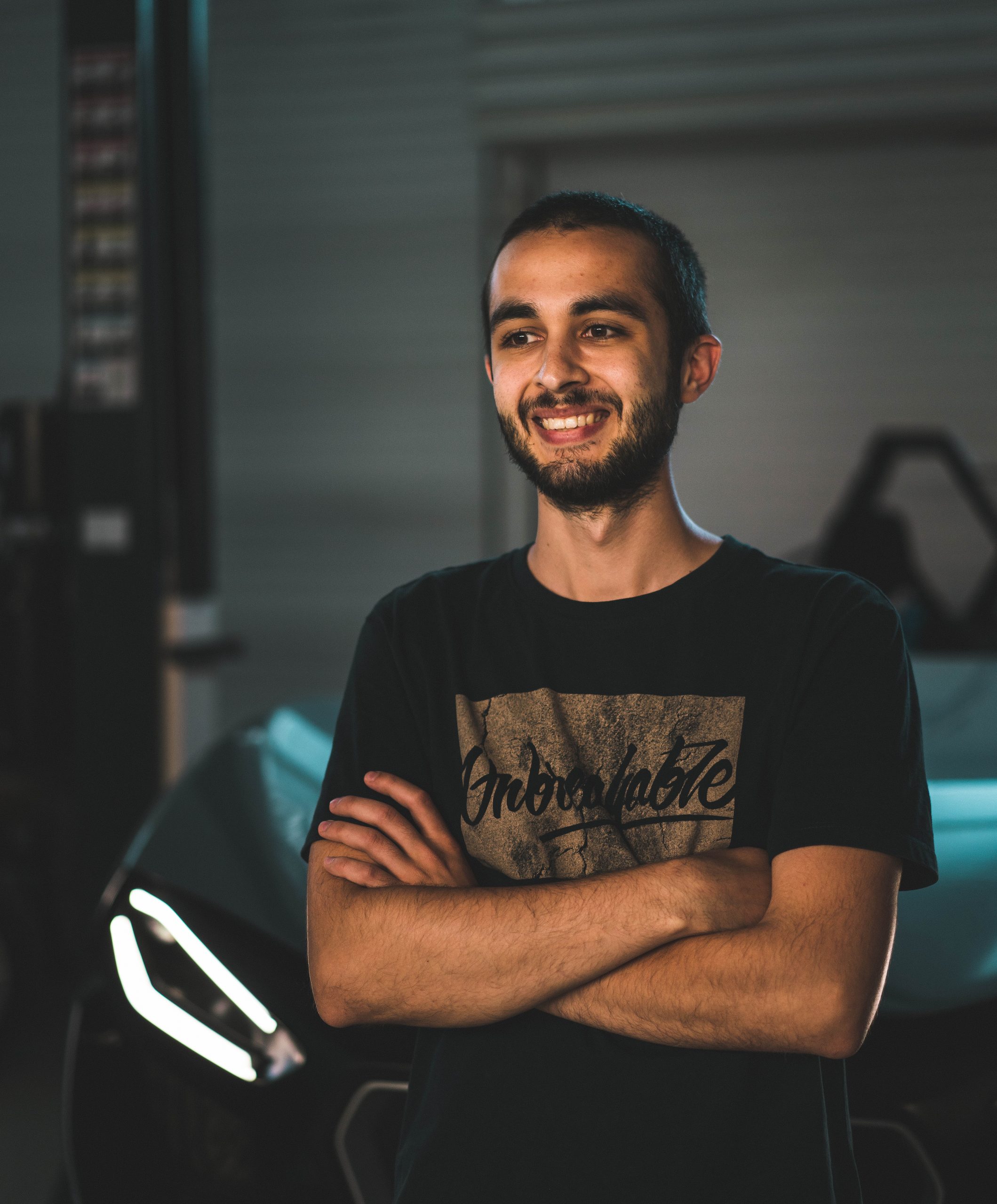 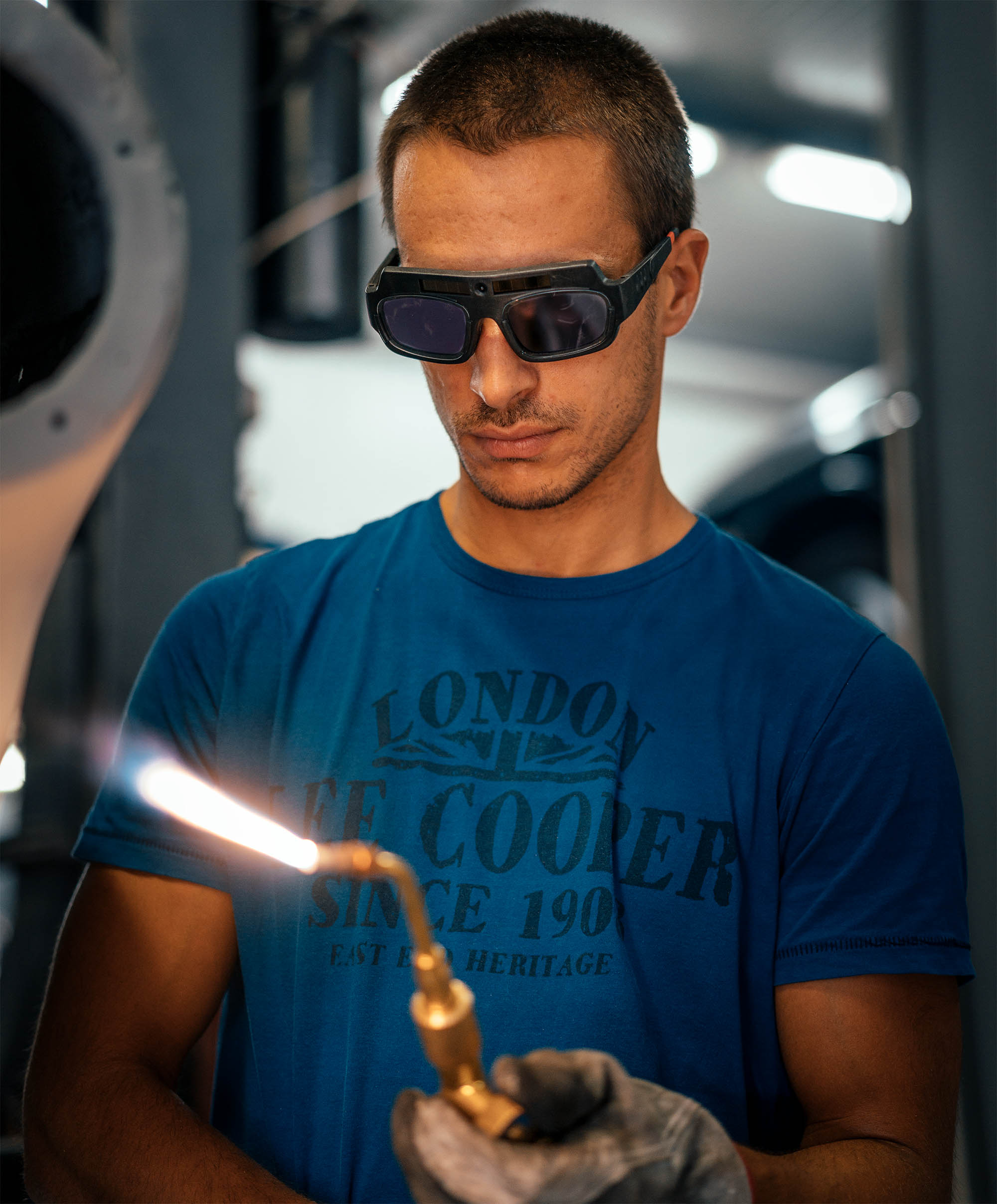 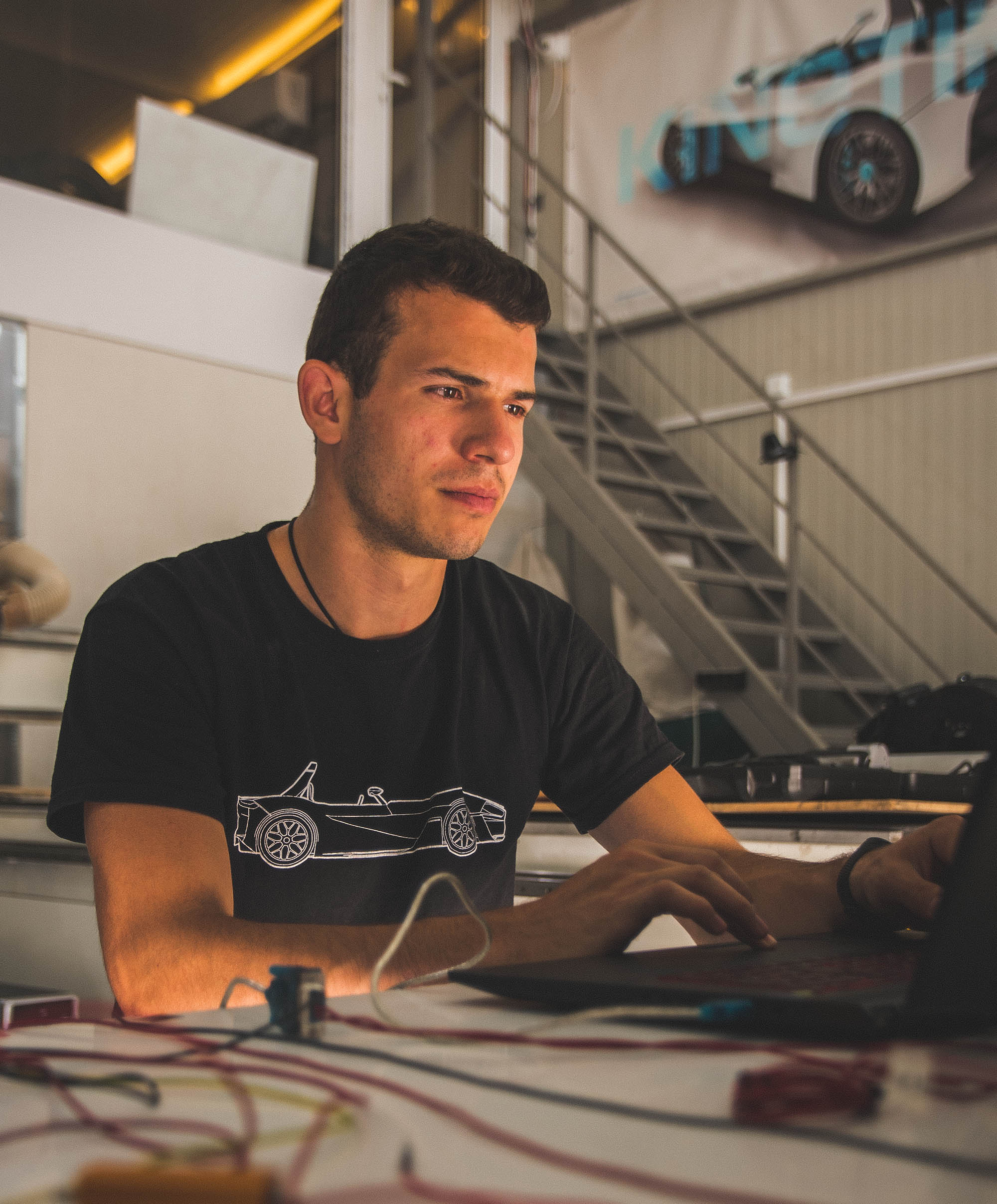 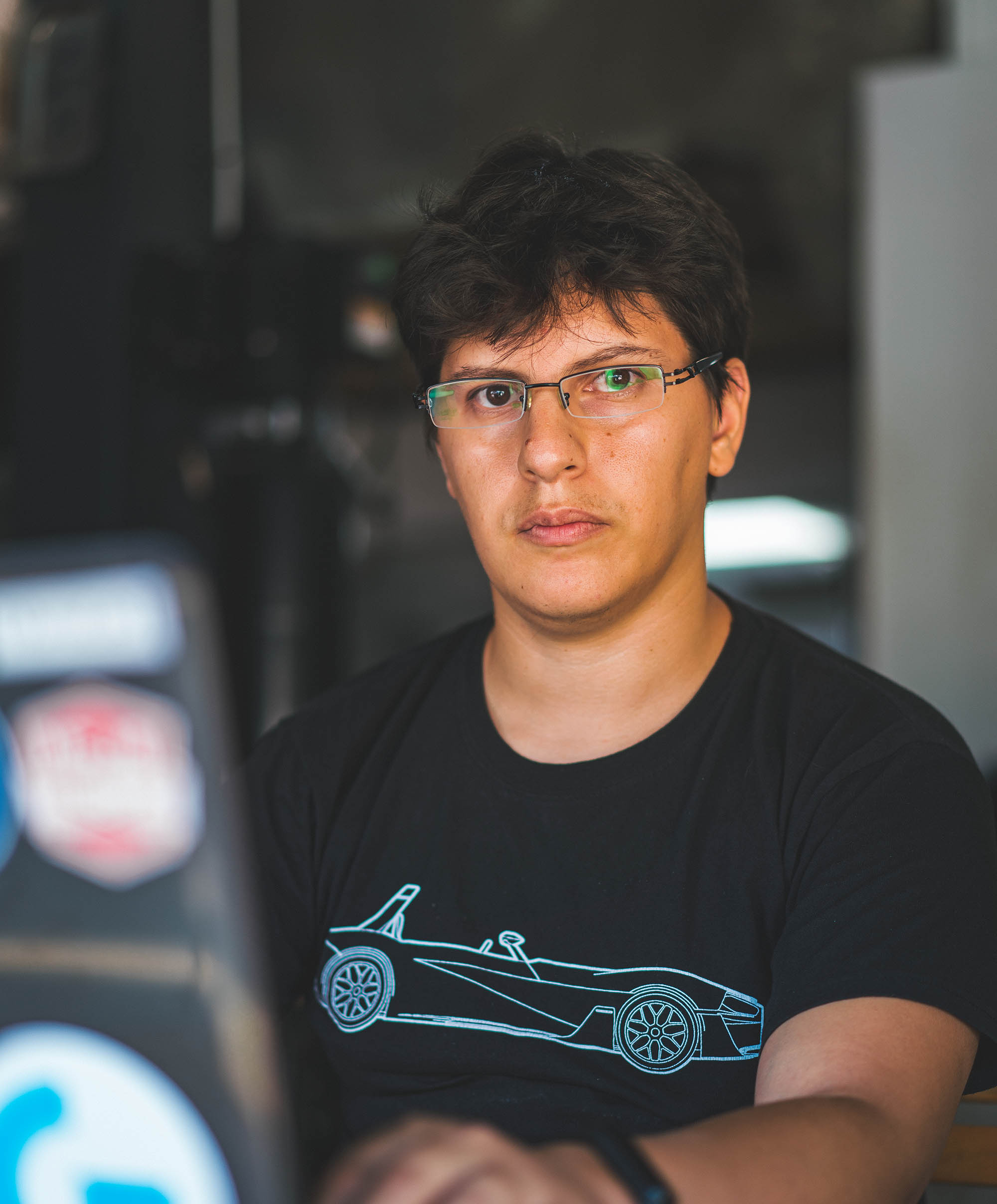